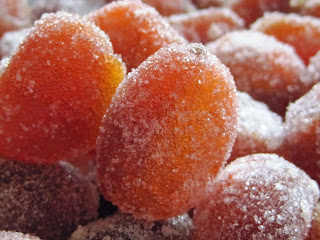 One of the highlights of Chinese New Year has always been the possibility that I will finally have my fill of Chinese candied kumquats. My appetite for these tasty little jewels has still not been sated, and it is not for lack of trying.

The problem is that even in Taiwan, not that many people make (or made) really good candied kumquat, so demand has always seriously outstripped supply when it comes to me and the perfect sugary golden morsel.  And even if I do come across a bag of them, they have to be fresh in order to really get me excited, but most tend to sit around on shelves for ages before somebody likes me comes traipsing through the store, so I often end up tossing out whatever was once initially pounced on with delight.

It is near the end of kumquat season here in California, and now that I am making lots of Anhui dishes, I've come across a new need for kumquat candy, because it is used not only for desserts, but also for various meat dishes. If that strikes you as odd, think of that seventies dish that was once the height of sophistication: duck a la orange.

In Anhui, as in other eastern provinces, candied kumquats are used to add a generous citrus note to lots of local creations, especially ones that feature pork. Chocolate and vanilla are nonexistent in the traditional cuisine, of course, but you can fine floral notes courtesy of rose petals and sweet olive blossoms (guihua), hot undercurrents due to ginger, and the nose-tingling evidence of warm spices like cinnamon and anise and fennel, but the most dramatic flavoring around seems to be the one that candied kumquats provide.

And even though I thought that finding candied kumquats was difficult, locating a good recipe for kumquat candy was even harder.

Most recipes I uncovered call for them to be boiled away in a syrup, and I tried that, and they ended up soft and mushy and tasted like marmalade, which is fine -- and marmalade can be used in a pinch if you don't have any candied 'quats hanging around your pantry -- but I wanted those mounds of those delicious, whole, sugared baby oranges with moist, tart centers that haunted my dreams, ones like I used to buy from a Shanghainese candy store in downtown Taipei in late winter. My quest led me to develop the following recipe, and I find that it faithfully echoes those faint but delicious memories.

I soon found that the biggest problem was keeping the fruits from bursting, because I wanted to retain the lovely shape of the kumquats in the finished candy. The secret to this is pricking the fruit all over so that steam can escape, and these holes also serve as perfect conduits for the syrup to wiggle its way into the molten centers and transform all those juicy pockets into crystallized bits of candy. Second, never allow the fruit to boil away; kumquats have delicate skins that require kid glove treatment; poaching and soaking them in hot syrup gives the skins time to toughen up with the sugar, and this in turn gives the skins a characteristic chewiness that I love so well.

This recipe takes a bit of time, but basically it is a matter of bringing a pot of water and kumquats to a boil three times, letting them soak in the hot water until the water cools down a bit, bringing them to a boil three times in sugar syrup, and then finally coating them with sugar. In other words, there is a lot of waiting around for things to happen, so you can attend to other things while the kumquats get busy turning into candy.

The reason why kumquats are given three hot baths is to remove the bitterness from the skins and to tenderize them so that they soak up the syrup later on. You will still have some seeds in the candies, but never fear, as they are edible, and they are easy to unobtrusively spit out if you are not inclined to nibble on them. Store the kumquats in an airtight container in a dark, cool place and enjoy them while they are still moist and delectable.


1. Wash the kumquats carefully and discard any that don't look perfect. The ends of the stems can be left on the fruit if they are trimmed very short. Prick the kumquats all over (at least 10 times) with a pin or skewer. Place the kumquats in a 2-quart saucepan and cover with water. Bring the water to a boil, cover the pan, and remove it from the heat. Allow the water to cool down a bit (at least half an hour), pour off the water, cover the kumquats with fresh cool water, and bring the pot to a boil again. Boil and rest the kumquats three times. (You can do this part ahead of time, if you wish, and refrigerate the cooked kumquats for a day or two.)

2. Place the kumquats back in the pan, add the sugar, 2 cups water, salt, and cream of tartar, bring the pot to a full boil, and then lower the heat to very low, so that there is practically no movement in the pan, as the kumquats will be very tender at this point and will easily fall apart. Slowly cook the fruit for about an hour, or until the fruit looks translucent and dark.  Cover the pan and let the fruit sit overnight in the syrup.

3. Bring the syrup to a boil, cover the pan, and turn off the heat; let the kumquats and syrup return to room temperature. Do this three times until they look like balls of pure amber.

4. Thoroughly drain the kumquats (reserve the syrup for something else; see the note below) on a cake rack overnight. Place about a cup of sugar on a rimmed plate or tray and roll a few of the sticky kumquats at a time in the sugar until they are completely coated. Place the sugared kumquats in an airtight container with extra sugar between them and keep in a cool, dark place. Use while still plump and fresh.

Note: The syrup can be used over pancakes or waffles, like marmalade, as a flavoring for sparkling water, and as a delicious coating for things like baked ham. Use any broken kumquats for cooking and save the pretty ones to serve with tea.