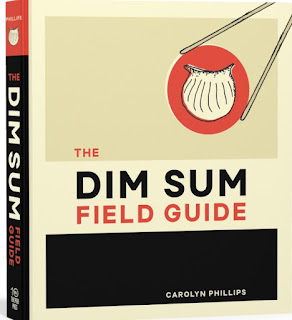 Good news to all of you out there who liked “The Beginner’s Field Guide to Dim Sum” and reprint I did for the Lucky Peach Chinatown issue: Ten Speed Press is going to publish an expanded version in August 2016 that should help you to satisfy all your cravings for this delicious way with brunch. Called THE DIM SUM FIELD GUIDE: A TAXONOMY OF DUMPLINGS, BUNS, MEATS, SWEETS, AND OTHER SPECIALTIES OF THE CHINESE TEAHOUSE, this fully illustrated handbook will include 80 entries on the many delights to be found in a dim sum restaurant and make you an expert on what to order, how to eat it, and everything in between.

Separated into the two main branches -- savory and sweet -- this guide will cover everything from steamed like Jiaozi and Siu Mai, to deep-fried dim sum such as Honeycomb Taro-Wrapped Pork and Coffee Pork Ribs, and all the many roast and braised meats you can expect to find wheeled past you in the dining room, like Char Siu, Roast Duck, Black Bean Chicken Feet, and Stuffed Bean Curd.

Those who have a refined sweet tooth will not feel left out, either, for this guide will introduce you to such traditional wonders as Raised Fermented Rice Cakes and Fried Water Chestnut Pudding, as well as more familiar treats such as Custard Tarts, Fried Sesame Balls, and Malay Cake.

Each entry will start out with the name in Chinese, as well as its pronunciation in Mandarin and Cantonese (with the correct tones, too!) so that you can learn to order fearlessly. The accompanying drawing will give you an idea of what to expect it to look like, but then the Guide will describe in detail how it was made, its regular ingredients, and how both the exterior and interior tastes and feels.

You will be shown what sauces to expect, what dips ought to be considered, and the related dim sum in that particular family. For example, steamed Char Siu Bun are tea house standards, but you should also consider the baked version in a puff pastry that crumbles satisfyingly with each bite.

The origins of each dim sum are also introduced to give you a sense of how this particular morsel developed. Many items trundled around on a cart, for example, originated in the seaport called Chaozhou in northeastern Guangdong, while others found their way from Yangtze River kitchens or Muslim diners in the cold north to the tropical teahouses of Guangzhou and Hong Kong. Some even have interesting asides, such as the urban legend that Char Siu Buns are like hot dogs, in that they are repositories for any sort of mysterious ingredients, including even human flesh. (Again, that's a legend -- the contents of these are probably more appetizing that a hot dog could ever lay claim to.)

You'll also receive advice on how to order from a cart and menu, the correct way to balance a dim sum meal, the various types of tea you should expect to choose from, and how to decipher the bill. There even is a short section planned on teahouse etiquette to get you looking like a seasoned pro in no time flat.