A Too Soft Heart 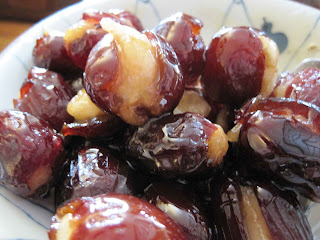 Teahouses are something that I really wish we'd have more of in this country.   And I don't mean another place that serves tea frappe horrors, but a real, genuine, Chinese teahouse with a relaxing environment, a good selection of teas, and, of course, some delectable and delicate goodies to savor over interesting conversations.

For a short while in Taipei we had a really fun place we'd go to called Kung Fu Teahouse.   It was decorated like a set out of Crouching Tiger, Hidden Dragon, with the waiters in old-fashioned costumes, some musicians playing on traditional instruments, and an assortment of time-honored snacks to nibble on over endless cups of great tea.

As soon as our part had been seated, we'd get served some hot towels and a couple of complementary saucers filled with roasted peanuts and seasoned melon seeds, and then we would get down to the serious business of selecting our tea and the sweet and savory snacks that would accompany it.  Once the dishes had been served, conversation would die down for about ten minutes while we concentrated on whatever delicacies had appeared, and after being gently sated, the banter would start up again.

A Too Soft Heart is one of the confections that were served there, as well in the restaurant King Join (Jing Zhao Yin), which offers the kinds of dishes that used to be served to the Qing emperors.   This dish has just the right balance of textures, and is bathed in an aromatic sauce.   To top it off, that name... who could not love a name like that?

This recipe is basically Chinese red dates -- or jujubes -- stuffed with a mochi-like filling that are then fried, covered with a sauce made out of some outrageously perfumed blossoms called osmanthus, and finally steamed.   This sounds complicated, but it's actually not that difficult to do.   They are best if served within an hour or two of being steamed, but the dates and filling are still nice and soft if they are steamed again just you serve them.   Do no refrigerate the dates once they've been cooked, as the rice dough will become hard and almost impossible to soften -- an excellent excuse to eat them all in the spirit of happy excess.

1. Soak the dates in lukewarm water to cover for about half an hour, or until soft and pliable, and then drain the dates.   If you have pitted dates, use a pair of kitchen scissors or a paring knife to fut a slit down the length of one side of each date and make sure that no pit remnants are hidden in there.   If you are using dates that still have the pits in them, use a paring knife to cut down one side of the length of each date and remove the pit.  Discard the pits and set the dates to one side.

2. Place the wheat starch in a small bowl, add the boiling water, and stir with a fork or chopsticks to make a paste.   Add the rice flour and cool water to the paste and knead them together into a soft dough.   Use only enough water so that the dough doesn't stick to your hands or the board.   Place the dough back in the bowl and cover it with a piece of plastic wrap.

3. Put the rock sugar (or sugar or honey) and water in a small saucepan and bring them to a boil.   Lower the heat to a simmer and let the sauce gently bubble away until the sugar water has reduced to a thick syrup.   Remove the sauce from the heat and, if you like, add either the osmanthus syrup or lemon juice and peel.

4. While the syrup is boiling away, divide the dough into 32 pieces, and roll each piece into a small marble.  Stuff each date with a dough marble and gently close the date around the dough.   Lay a sheet of parchment paper on a baking sheet and set it next to the stove along with a slotted spoon.

5. Heat about 2 inches of peanut oil in a wok over medium heat until a wooden chopstick dipped in the hot oil begins to bubble all over.   Add a handful of dates to the oil at a time so that they are not crowded.  Fry them until the rice dough puffs up; they don't have to brown, just cook lightly all the way through.  Remove the fried dates to the parchment paper to drain while you fry up the rest of the dates.   (You can prepare the dates a couple of hours ahead of time up to this point; just cover them and leave them at room temperature until about 15 minutes before you serve them.)

6. Place all of the drained dates in a shallow, heatproof bowl.   Pour the sauce over the dates and then steam them for about 15 minutes.   Serve them immediately while they are still hot, or let them come to room temperature.