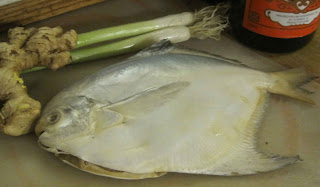 When I first learned about Chinese people, it was through things like the old Charlie Chan mysteries. The operating word was "inscrutable." Other words that tended to be bandied about regarding people from China were things like "mysterious" and "clever." Then Kwai Chang Caine came along in the Seventies and taught me that they were stoic, could walk on hot coals, and that they called their disciples Grasshopper.

But nobody ever let on that the Chinese are also pretty funny.

Take this delicious dish from the eastern seaboard province of Jiangsu. It's called Suzhou-Style Smoked Fish. But it isn't smoked. Smoke hasn't gotten anywhere near it unless you've either burned the sauce or puffed on a Camel over the stove; neither is recommended. So why is it called "smoked"? Got me. Some have told me that it's because it looks smoked, others that it is slightly dry like a smoked fish. But the most common reaction I get is a grin.

You have to understand, this is a people that plays with its food. Chinese cuisine is full of silly dishes. Changsha down in Hunan province has one called Yolkless Eggs, where the ends of raw eggs are snipped off, the yolk discarded, and the white mixed with a flavorful stock, which is then poured back into the shell and steamed. You then peel the eggs and serve them in a delicate sauce and wait for your guests to bite into what they think is a hard-boiled egg. Levity ensues.

Other dishes look like one thing but actually are another, like they appear to be meat when they're actually vegetables, and so on. And if you've ever eaten a lot with Chinese people, mealtimes tend to be places where jokes are told, guests are regaled with shaggy-dog tales, and the laughter gets more raucous as the diners fill up on food and wine.

But I've gotten sidetracked. Let's talk about this delectable appetizer from the elegant city of Suzhou, a place where some of China's best food was born.

Anyone who's eaten at my house knows how much I love to smoke things - meat, chicken, eggs, bean curd... they all get turned a gorgeous mahogany hue over smoking tea leaves, sugar, spices, and rice. And I'm not going to stop doing that.

But Suzhou Smoked Fish is also on the regular menu because a) it's so delicious, b) it's so easy to make, and c) it's so delicious. It's normally used as an appetizer, but I've enjoyed it on top of a bowl of soup noodles, with a good dollop of the sauce dribbling down into a hot bowl of rice, or as a midnight snack as I stand in front of the fridge with a glass of wine. It's that versatile and irresistible.

You can easily put this together in half an hour. The really great thing is that it's best served slightly cold, so stick it in the fridge overnight, and then you can put it out for a party without breaking a sweat. Just get your explanation ready as to why it's called Smoked Fish.

Jiangsu
Serves 4 to 6 as an appetizer, or 2 as a main dish

1. Clean and scale the fish as needed. Gut it, cut off the head, fins, and tail, and rinse the fish carefully before patting it dry with a paper towel. Cut the fish crosswise into 1-inch strips using a deeply diagonal cut.

2. Place the fish slices in a medium work bowl. Smash the green onions and ginger with your cleaver and add them to the fish along with the star anise, soy sauce, and rice wine. Toss the fish with these ingredients and let it marinate in a cool place for at least half an hour and up to a couple hours. Pour off and discard the marinade, and then lightly pat the fish dry with a paper towel.

3. Heat about an inch of the peanut oil in a wok over medium heat. Add about half of the fish to the wok so that they're not crowded. Lightly shake the wok to keep the fish from sticking. Don't turn them over often, as this will break up the slices once they have cooked. Instead, wait until one side is golden brown before gently flipping it over. Fry the other side until it's golden and remove the cooked fish to a clean plate. Repeat with the rest of the fish.


4. Skim the oil and then heat it over high heat until a wooden chopstick inserted in the oil immediately begins to bubble furiously and the oil shimmers. Add a few slices of fish to the wok (be careful of any spattering) and carefully fry them until both sides are a dark brown and crispy. Remove the fish and repeat with small batches of the rest of the fish.

5. Heat the sauce ingredients in a medium saucepan until they come to a boil and simmer for 5 minutes. Remove from heat and add the fried fish. Gently toss the fish in the sauce, let it come to room temperature, and then cover and refrigerate the fish. When you think of it, turn the fish over in the sauce so that every side gets permeated with the rich sauce.

6. To serve, remove the fish from the marinade and pick off any ginger or onions that might cling to it. Place the prettiest pieces on top and serve as is, or with some finely-shredded green onion. This goes great with beer as a starter course or can be served over a plain noodle soup.