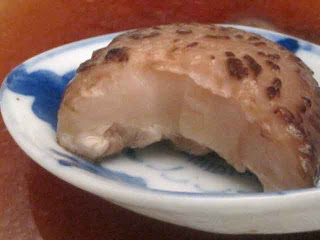 No, not that kind. The ones I'm referring to are dried Chinese black mushrooms, also known as either donggu (winter mushrooms) or xianggu (fragrant mushroom) in Chinese, or shiitake in Japanese.

I used to think that all black mushrooms were built alike.  In fact, I was utterly clueless, a fact that my museum coworker, Shen Nai'e, made no bones about one day when we went to South Gate Market in Taipei. I needed mushrooms, and there was a big bin in a stall with a sale sign stuck in it, so I got myself a bag and started grabbing handfuls. Nai'e whacked my hand, took away the bag, and dumped the mushrooms back into the bin. "Those are no good," she scolded me. "They are too thin and have no smell." When I asked which ones would pass muster, she herded me over to a small bin filled with fat little brown balls.

Standing over them, it struck me - the aroma, that is. Wafting up from those mushrooms was the absolute distilled essence of xianggu. They were lots more expensive, too.

"Look at them," Nai'e said, plucking a fine specimen out for my inspection. "These are from Japan. They're fat, and they have this pretty pattern on the caps," she noted, running her long finger along the white furrows, "which is why we call them 'flower mushrooms' (huagu)."


Intrigued, I wandered back to the original bin and grabbed a handful of the ones Nai'e had dismissed out of hand. They indeed were flat and nondescript and smelled only faintly of mushrooms. It was sort of like realizing that, yes, the world was round after all. I tossed the less fortunate fungi back in the bin with a newly superior air and watched as my friend from the museum burrowed through the flower mushrooms. "Thick," she muttered to me, "you want them thick and meaty." It seemed rather odd and compulsive behavior for someone so elegant and reserved as Nai'e, but I was soon enraptured, too.

It's easy to get rhapsodic about these mushrooms because they really are meaty and they really are as fragrant as their Chinese name tells you they are: when I soaked a dozed of these yesterday to make soup, I trimmed off their tough stems once they had been plumped, and for the rest of the day my fingers smelled of the earth and of the finest Shaoxing wine and perhaps even faintly of pork.

The secret to these magic mushrooms is that you have to get the ones from Japan, and the best ones of all are the ones called "flower mushrooms." Natural furrows cover the caps sort of like tortoise shells, and if you look at them closely, you'll see that the good ones are split naturally into little bumps and ridges, while the knock-offs have had their caps sliced with razors; one is natural and pleasing, the other just looks wrong.

Copycats from other countries just aren't the same, either in symmetry, perfume, or flavor. Even the texture is better, and it could easily be compared to one of the "four treasured dry ingredients" so prized in Cantonese cuisine: dried Japanese abalones. There's nothing vegetal at all about these little guys. It's the plant world's answer to meat. That's all there is to say.

This is one of the rare instances where I personally feel that the dried ingredient outshines the fresh. You can, of course, use fresh black mushrooms here, and the soup certainly will be good, but it won't be that bit of nirvana in a bowl that the dried ones will toss off with the least bit of encouragement. Yes, go with the dried here. If you have a Chinese herbalist's in your area, try to see if they have flower mushrooms; these folks often have a fussier approach to their offerings, a higher turnover, and a willingness to let you poke and prod their dried stuff since it is often loose rather than bagged at some packing plant.

When you have something as perfect as this, it's best not to fuss about with it too much. The simple Cantonese soup that is featured here is all about the mushrooms. Traditionally, this soup is double steamed (placed in a crock inside of a steamer), but there's nothing about the ingredients that calls for such gentle handling. Flower mushrooms are resilient and bouncy, and they won't fall apart no matter what you do to them, so I just simmer them in their own stock, add a bit of seasonings and rendered chicken fat, and consider this the easiest way to enjoy the most perfect of soups.


Cantonese flower mushroom soup
Qingdun donggu tang  清燉冬菇湯
Guangdong
Serves 6 to 8 for a multicourse meal, or 2 to 3 for a family meal

12 one-inch dried "flower mushrooms"
8 cups filtered water
8 thin slices fresh ginger
2 green onions, trimmed but not cut
¼ cup Shaoxing rice wine
2 teaspoons sugar
2 tablespoons light soy sauce
1 tablespoon Rendered Chicken Fat
1. Start this recipe the night before you want to serve it by rinsing off the dried mushrooms in a colander and then placing them in a medium work bowl. Cover them with about 2 cups of the (cool) filtered water and let them soak overnight. (You can cover them with boiling water if you're in a huge hurry, but neither the flavor nor especially the texture will be as good this way.)

2. The next day, cut the stems off of the mushrooms using a pair of kitchen shears. Save the stems for your stockpot, and reserve the soaking water for this soup. Place the trimmed mushrooms in a medium saucepan and carefully pour the soaking water into the pan, being sure to strain out all of the solids at the bottom of the bowl.

3. Add the rest of the water to the pan, as well as the ginger, whole green onions, rice wine, sugar, and soy sauce. Bring the water to a boil and then lower the heat so that you just have a gentle simmer. Cook the mushrooms for 30 to 45 minutes. Taste the stock and adjust the seasoning before removing the onions and adding the chicken fat. Serve very hot.