The case for ketchup in Chinese food 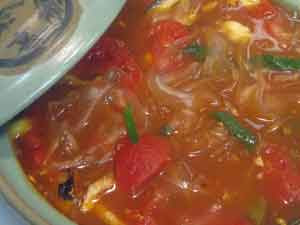 There's a lot of snobbery around when it comes to ketchup, or catsup, or tomato sauce, or red sauce, or whatever it is you call the stuff that you squirt on your hamburger.

There are designer ketchups in upscale markets nowadays that boggle the mind of people like me who once thought that Heinz 57 was the best in the known universe.

Even Jamie Oliver has a personal recipe for ketchup, and I've made it, and it's very good indeed.

However, when it comes to Chinese food, I've heard lots of poopooing it as an ingredient.

Somehow, folks have come to think that ketchup in Chinese cuisine is an abomination, a bastardized, bowdlerized, bilious additive that turns a sublime dish like the subtle Cantonese sweet-and-sour pork into a glowing goo-infested pile that by all rights should be eaten only while wearing a haz mat suit and a tee shirt that says I Am A Tourist in very large letters. And they may be right.

However - and this is something that most people don't know - ketchup is an important ingredient in many of China's coastal cuisines, particularly the dishes of Shanghai.

A good case could be made that this was in part because of the heavy foreign influence Westerners made in that great city when they carved it into concessions and transplanted their cultures and favorite foods into their respective sections. But whatever or whoever is responsible for bringing ketchup to the Chinese, it ends up that at least as far as this sauce is concerned, the food only got better.

Just as meatloaf, steak, and french fries often are given a good dribble of Heinz to perk up their flavors, Chinese fried foods often have a little saucer of ketchup perched on the side for dipping and flavoring. But the Chinese took this humble condiment a few steps further, turning it into a remarkable ingredient for many of their most delicious sauces, most of them in the red or brown spectrum - but never day-glo orange - and with quite a few of them tangy with a vinegar balanced with a sprinkle of sugar. I've already included a number of recipes in this blog that do call on ketchup as a seasoning, but I have one more that I really like when the weather is cold and the fridge looks particularly dreary.

This delicious winter casserole from Shanghai is flavorful enough to serve alone with little more than a bowl of hot steamed rice, but it's also good enough to serve to guests.  It's super easy to prepare, cheap as all get out, and is vegan to boot. You can keep most of the ingredients on hand in the pantry, as the only things you need to pick up from the market are a couple of fresh tomatoes, although some good canned San Marzano tomatoes work really well here if the fresh stuff isn't looking too appetizing. (Roma tomatoes are often the best bet for fairly flavorful tomatoes in the off season, but don't use those pink tennis balls that questionable greengrocers try to pawn off as tomatoes since the flavor of the dish really depends on tomatoes that taste like tomatoes.)  When you buy your canned tomatoes, try to get whole ones because they tend to be of better quality than the chopped or crushed ones, and you can then cut them up to any size you like.

With the tomatoes out of the way, that leaves us with just some fresh ginger and green onions to pick up.  If you are like me and cook with ginger a whole lot, you'll probably have a nice piece or two stashed in a brown paper bag in your vegetable bin; I don't store my ginger in plastic bags, since they'll rot fairly easily that way, but paper will wick up any moisture and keep my ginger lovely for weeks.

Now we're left with just the green onions, which should be a snap to find, but if even this is causing you trouble, then use half a regular onion instead and no one will be the wiser.  If you want, you can add some sliced mushrooms to the dish when you fry the ginger and green onions, or toss in other ingredients like meat - this is one very versatile meal.

As you can see, there's no excuse for you to not have absolutely everything on hand for this dish, and then you can put together something hot and delicious in minutes.  I was going to mention that even kids like this casserole, but I think I'm beginning to sell this a bit too hard.  Just try it and let me know.

Serves 4 to 6 as part of a multi-course meal

2. Peel the tomatoes by blanching them (make 4 light cuts down each tomato and then cover them with boiling water for a few minutes until the skin shrivels, at which point the skins can be easily removed); pull any skins off of the canned tomatoes, if you are using them.  Core and cut the tomatoes into 1-inch or so cubes, and reserve all of the juices.

3. Drain the mung bean sheets and slice them into half-inch strips. Place them back in the bowl, soak them in boiling water for about 5 seconds to remove any mustiness, and then drain them in a colander.

4. Heat the oil in a wok over high heat until it begins to shimmer. Toss in the ginger and quickly stir-fry for a few seconds to release their fragrance. Add the onions, stir them quickly in the oil for a few seconds more, and then add the tomatoes and their juices.  After about 10 seconds, add the rest of the ingredients except for the mung bean sheets.

5. Bring this to a boil and taste, adjusting it as needed for more sweetness or saltiness.  Add the mung bean sheets and bring to a boil.  This is traditionally cooked in a casserole, so if you have a 1-quart pottery casserole handy, pour everything into it and lower the heat to medium. Simmer the covered casserole for 10 or 15 minutes over medium-low heat until the mung bean sheets are tender but not mushy and the sauce has thickened.  Serve hot with a sprinkling of roasted sesame oil, chopped cilantro, or whatever garnish you would like.


A note on mung bean sheets, or fenpi: These are thick discs that are usually available dried in the noodle section of a Chinese grocery, and they sometimes come with creative translations, such as the one here: green beans starch sheet. If in doubt, just ask a clerk or another customer if what you have plucked from the shelf is fenpi, and they'll probably be happy to help.

Fenpi start with finely ground green beans and some wheat starch that is then mixed with water and cooked into a paste; this paste is then poured into circles and dried. Fenpi probably originated in the northeast area of China around Manchuria, and they are still used from Tianjin and Beijing on up north mainly as a base for cold appetizers that are really quite refreshing and delightful, and there these sheets are referred to as lapi, as in the famous dish Jisi lapi (Shredded chicken over mung bean sheets).  In these dishes, the mung bean sheets are soaked in cool water until plump and pliable, and then they are cut into thin strips and used as a base for things like shredded cold chicken and cucumbers tossed with a mustard and sesame sauce.