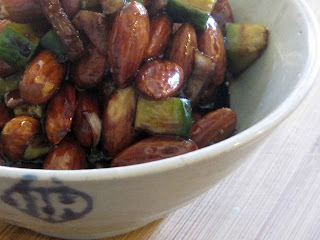 Any visit to Beijing - or to any good Beijing restaurant worth its salt, for that matter - will most likely lead to an encounter with something particularly addictive: aged vinegar peanuts.  I've modified the traditional recipe a bit and am really happy with the result. A bowl of these beauties pretty much has everything going for it: it's crunchy, sweet, piquant, fresh, and salty all at the same time.

And really, what is not to love? The nuts are gently fried to a perfect state of crispness, tossed with bright cubes of green onion, onion, and cucumbers, and finally bathed in a sweetened vinegar. Simplicity incarnate.

What I've done here is take the traditional recipe a couple of steps further. The onions and cukes are lightly salted to remove any moisture that could potentially threaten the absolute state of crunchitude that the peanuts possess. Second, red onions are used instead of white or yellow to add a bit of color to the scheme. (All of you chili heads out there can toss in some chopped fresh red chilies, of course, and neither garlic nor cilantro would be out of place here for those who love them.) Third, the vinegar is first simmered with the sugar and salt so that their graininess is dissolved, the tastes are perfectly balanced, and the sauce is given a chance to thicken so that it robes each nut with a gentle shellac.

The skin is preferable here because it will wrinkle up as it fries, giving the nut the appearance of tiger skin, or hu pi, that delights the eye and contrasts so well with the other ingredients. The ridges and valleys on the skin will also act as tiny scoops to grab onto the sauce and hold it while you transport the glistening nut to your happy maw. What causes the sheath of a humble nut to turn into tiger skin is the expansion of the nut as it slowly fries, puffs up as the moisture cooks away, and then shrivels back down, leaving the skin to try to cover up a much smaller body.

This is, admittedly, my own take on a traditional recipe, which just tosses fried nuts with aged dark vinegar, some sugar, and perhaps some tasty condiments like the ones suggested here. But l particularly like the mellowness that cooking the vinegar first provides, and any leftover sauce can be used to drizzle on meat, eggs, veggies, or what have you. Plus, I adore the contrasts in color, texture, and flavor that all these veggies and seasonings provide.

But veggies and vinegar aside, the star of this particular show are the nuts, and the secret to this dish is this: the nuts need to fry very slowly and they must be started in cool oil.  The main mistake that folks make when frying nuts is that they start by heating the oil and then tossing in the raw nuts. But that doesn't allow the inside of the nut to fully cook before the exterior is burned, and what you do not want to have under any circumstances are burned nuts. If that happens, toss them out and start all over. So, use cool oil here, add the nuts to the oil before you turn on the heat, and then moderate the heat so that the nuts bubble merrily away without browning too quickly.

Chinese cuisine is full of little tips like that, things that seem so obvious once you parse them out, but ones that make all the difference in the world. Take this story for example...

The story goes that a Chinese opera performer had problem: every time he played a general on stage and swung his spear, it would hit the fan of flags arrayed across his back.  The performer tried and tried to figure out how to do this properly, but he never failed to whack at least one of the flags.  It ruined his performances, and his audiences were losing patience.  Desperate, he begged a famous opera master to reveal to him how he managed to swing his spear so effortlessly and always miss the flags.  The master smiled and said that younger man would have to become his disciple, to wine and dine his new master and convincingly show his fealty before the request could be granted.

The younger man leaped at this rare opportunity.  He kowtowed to his new master with great ceremony and showered him with feasts and gifts, trying in every way to curry his favor.  One day, at the end of a seemingly endless series of banquets, the younger man finally couldn’t wait any more.  He pleaded with the master to at last show him his secret.

The master picked his teeth for a while, and then finally nodded and removed the toothpick from his mouth.  “Watch,” he ordered.  He held the toothpick straight out from his belly like the haft of a spear, and then swung it slowly up around his face and back down to his belly, never taking his eyes off the tip of the toothpick.  “That’s it?” the young man exclaimed, “just watch the tip?”

Every Chinese person (and just about everyone else) I know loves peanuts.  There’s a lot of Chinese recipes that call for fried or roasted peanuts, too, so I’ve tried just about everything to make the perfect peanut, and it wasn’t until I figured out this method that I hit the jackpot.  It’s so easy that it seems almost silly to focus a recipe around it, but just as in the foregoing story, sometimes the magic is in the details.

1. Start by making the vinegar sauce:  Bring the vinegar, sugar, and salt to a boil in a small saucepan and then reduce the heat to medium. Simmer the vinegar until it has reduced a bit and has thickened; the vinegar will look heavier at this point and will drip more slowly off of a spoon or rubber spatula. It will thicken up more as it cools down.

2. Place the onion and cucumbers in a sieve or colander, sprinkle them with the other teaspoon of salt, shake them all around, and let the veggies sweat while you prepare the rest of the dish.

3. Pour the oil in your wok and add the nuts to the oil. Heat up the oil and nuts over medium-high heat until the oil begins to bubble, and then lower the heat to medium. Stir the nuts often while they cook. You want to maintain a high enough heat that a white foam forms around the nuts, but not so hot that the nuts burn. Stir and cook until the nuts are toasted and golden brown. Taste one to make sure: it should taste nice and toasty. At this point the nuts are done, even if they are not crunchy, because that won't happen until they cool down. Use a slotted spoon or Chinese spider to scoop the nuts out of the hot oil into a work bowl lined with a couple of  paper towels. Shake the nuts around in the bowl so that most of the oil gets sponged up by the towels, as this will allow the vinegar to cling to the nuts instead of sliding off.

4. When the nuts have cooled down, squeeze any liquid out of the onions and cucumbers and add them to the nuts. Add whatever other condiments you want, like cilantro, chili, and/or garlic, as well as as much of the vinegar sauce as you like. Toss them all together and serve.

5. If you plan to serve this a lot later, keep the peanuts, sauce, and veggies separate so that they don't get all soggy. If you are only serving a couple of people, you can toss together only as much of the ingredients as you want and refrigerate the rest.