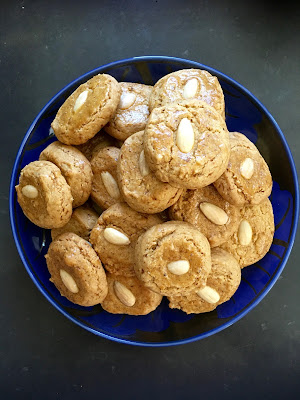 When I was a kid, I was fascinated by San Francisco’s Chinatown. Going there was a rare treat, but I always knew what I wanted when we got there: a box of almond cookies.

Packed up in a pretty pink box with a string tie, they were unlike anything we ate down in San Jose, which was pretty Midwestern when it came to food then.

To me, Chinese almond cookies tasted more like Chinatown than any other sweet I tried, not that there was ever that huge a selection.

Later, when I was older, I tried to relive that experience, only to find that the flavors and textures were off. The cookies were bland instead of exciting, tasted of fat and sugar rather than almonds, and tended to be slightly soft, not tantalizingly crispy, as I remembered.

And so, of course, I had to rectify this.

As you can see, I’ve been on a bit of a warpath lately. Chinese American food is sooo good, but we never get to really eat it anymore. It’s as American as, say, Tex-Mex or Red Italian, and I am all in favor of seeing it make a genuine comeback. But cooked with pride and made with even better ingredients than before, of course.

Almond cookies seem like an obvious choice for this first salvo. The original inspiration for this recipe came from a 1979 cookbook called Better Than Storebought by Helen Witty and Elizabeth Schneider Colchie. I’ve made a lot of adjustments over the years, though, to make it more almond-y, less sweet, and a bit healthier. They even have that golden shiny glaze and crinkly fissures on top.

I hope you agree that these are just what we need for snacktime.

Topping:
1 large egg, lightly beaten
32 whole almonds, either unblanched or blanched (i.e., with or without skin)

1. Place the shortening (or lard), both sugars, 1 egg, and both extracts in the bowl of a food processor equipped with a metal blade. Whiz it for around a minute, stopping the machine now and then to scrape down the sides, until you have a very light, creamy mixture.

2. Mix together the ground almonds (or almond flour), pastry flour, salt, and baking soda in a small work bowl. Add the dry ingredients to the food processor and pulse the cookie dough until it is evenly mixed.
3. Have 2 sheets of parchment paper or foil ready. Scrape out half of the cookie dough onto each sheet, spread it out into a log-like shape, and then roll the dough up in the paper or foil like a cigar. Freeze the dough for about 20 minutes, just until it is solid but still easy to cut.

4. Place 2 racks near the center of your oven and turn it on to 275°F | 135°C; don’t use the convection setting. Line 2 baking sheets with Silpat or parchment paper.

6. Brush each slice with the beaten egg, and then press a whole almond in the center. Bake the cookies for 25 minutes. Rotate the sheets from top to bottom and back to front, and then increase the heat to 325°F | 160°C. Continue to bake them for about 10 minutes more. When they are golden brown, remove them from the oven and let them cool to room temperature. Keep them in an airtight container or freeze for longer storage.

If you can hunt down some good lard, try that. It’s wonderful.

Even better, make your own lard: Cut some chilled pork fat (it’s much easier to work with when it’s very cold) into small dice. Place the fat in a saucepan, add a couple of tablespoons of water, cover the pan, and set it over medium-low heat. Stir the fat as needed to keep the solids from burning. As soon as you have a nice layer of fat on the bottom, remove the lid so that the water can evaporate and continue to cook the fat, adjusting the heat as necessary. It is ready when the solids are a toasty brown. Drain the fat through a sieve into a container, and then refrigerate it.

Lard will keep a very long time if kept cold. And be sure to save the cracklings – one of my mother-in-law’s favorite sneaky snacks was white rice topped with cracklings, a bit of melted lard, and a drizzle of soy sauce. I have to agree with her here… this is pretty amazing stuff and is much better than it sounds, all buttery and crunchy.

Whenever you need to cut up things like pastry dough or cookie dough, see if you can make a number that is easily divisible by 4, like 8, 16, 32, and 64. The reason for this is that you then don’t need to measure the dough with a ruler, but rather simply slice pieces in half until you have the correct number of pieces. Brainlessly easy.